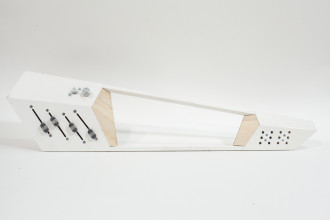 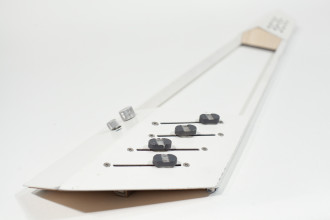 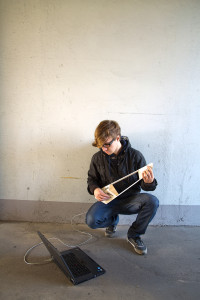 The resemblance to the traditional ukulele is not a coincidence. The strict plagiarism of the SynthOlele is aiming to become the ukuleles’ electronic cover-version. The SynthOlele combines several elements for the control of synthesized sound and works as an interface.

The controller is built around an Arduino-like prototyping platform called JeeNode. It is plugged into the computer via USB and works with a program made in Max/MSP. You can either use it to control the special SynthOlele-sounds or as a classic Midi-Controller for your favorite DAW.
The body is made of folded aluminium and wodden side pannels. The size and the way, how to play the instrument, are clearly influenced by the Ukulele.